I’m back from a two-week visit to the place of my birth – England – where I also spent half of my childhood and most of my teen years while my father was in the U.S. Air Force. Perhaps the most impressive part of the whole journey – more than how modern and healthily progressive England is now, and more than the familiar tourist spots, such as the Tower of London, Westminster, Canterbury Cathedral and Dover Castle – was being re-introduced to Great Britain’s fabulous rail system. 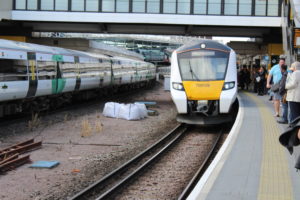 Sure, I rode the trains and buses of England in my youth as a child with my parents and later independently as a teen. And I was reliant on buses and trains when I spent my twenties in Chicago, and since then, when taking the subways of New York City (albeit unfamiliar with the NYC’s routes). But now, having lived 16 years in Virginia and 18 years before that in Florida, both places where being car-less would mean having no life or ability to work and where traffic jams and the expenses involved in owning a vehicle are both part of surviving and succeeding, it has been exhilarating to experience a lifestyle in the U.K. where having a car is an option rather than a necessity.

So, returning to the states leaves me with the obvious question raised by other American travelers: why hasn’t the United States caught up with the United Kingdom, Europe, Japan and even China and Russia, and invested in a national rail system?

The fact is, outside of New York City and Chicago’s extensive system of subways and trains, and Amtrak’s sluggish 28 miles of 150 miles per hour track in rural Massachusetts and Rhode Island, the American rail network is largely limited to availability and speeds of 110 miles per hour or less. But why? A nationwide rail system would greatly alleviate congestion, road accidents and pollution. It would also provide thousands of jobs, which in turn would boost our economy.

One problem is that the U.S. invests less in its infrastructure than other modern countries. There is also a lack of commitment to a well-funded national rail plan on the federal level, which is what it would take to link one coast to the other and all our cities and towns in between. This may be due to our federal government passing off major decision-making power to states, which have their own financial priorities. We also have a government system on the congressional level that lacks the educated understanding of what it would take to run a successful nationwide rail system and that tends to curry favor with gas companies and oil lobbyists. And that lack of commitment or motivation puts a stranglehold on moving forward in providing our citizens with the economic and employment benefits a national rail network could provide.

There are the naysayers, those who feel our country is too big for any kind of congruent and cohesive rail system. Some point out that our federal government is too enormous and too overwhelmed with other concerns, urgencies and tasks to come together on such a large-scale national project. But that wasn’t always the case.

In 1956, Congress voted to invest in a national highway infrastructure over a three-decade period, to connect our largest cities and eventually towns. The undertaking, funded by a gas tax with 90 percent coming from the federal government, was implemented by states but with highway alignments and universal physical requirements chosen on a national level. And it has been largely a success.

But as our population continues to grow, building more highways only adds to our pollution problems and has the tendency to destroy the neighborhoods they run through. A rail network with ever cleaner trains would alleviate traffic jams and fossil emissions, and give the poorer sector of our population a transportation opportunity to be able to find and travel to work; however, this commitment and funding must come from Congress rather than from our already burdened state governments.

For those who argue that the landscape of the U.S. is not conducive to such a massive project, with its miles of unpredictable, changing and twisting terrain that make high speed rail travel difficult and financially out of reach, one only has to look at China with its 75,186 miles of tracks. China’s willingness to invest in high-speed railways has greatly reduced travel time for its citizens, not to mention decreased pollutants emitted by cars, and has provided thousands of rail jobs in the process.

In the U.S., if we snooze, we could financially lose, and that scenario is already occurring. Currently, China and Japan are bidding for rail projects in several countries, including the United States. China, for example, has announced that it is investing $100 million in a project that promises to be the first high speed rail line between Los Angeles and Las Vegas. And in Texas, a U.S. company is planning a $10 billion high speed railway that will use a fleet of Japanese bullet trains to transport passengers from Dallas to Houston in less than 90 minutes.

In the end, however, it may come down to generational differences when deciding whether the U.S. will ever catch up with the rest of the modern world and ride the train. Millennials, who tend to be more environmentally conscious and who as a generation prefer urban over suburban lives, are more than ready to ditch the necessity of owning a car. As they age and flourish in their careers, their spending power might demand a rail system that is eco-friendly and that encourages a walk/ride lifestyle rather than a car-driven one. Since politicians vote where the money goes, it is the Millennials – and the Gen Zs following behind them — who might be the governing factor when deciding whether we should join other progressive countries in utilizing a more efficient and easier way to get around.

Hopefully, by then, America’s financial opportunity to invest in our own rail system won’t have already left the station.