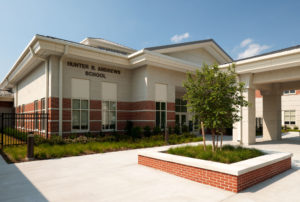 The Valentine’s Day Massacre at Marjory Stoneman Douglas High School in Parkland, Florida evoked a memory of when my own daughter attended Hunter B. Andrews School in Hampton, Virginia years ago and a kid brought a gun to school.

My recollection was triggered by the haunting news clip of an anguished mother whose daughter was one of the 17 killed when a former student found his way in and mowed down more than two dozen people with his AR-15. In the sound bite, now all over the Internet and on every news station, the mother screams out to Trump, “What are you going to do, President Trump?” And then she demands to know how the killer was able to get into the school and why there weren’t metal detectors to stop him or any intruder.

My daughter was homeschooled from 5th through 7th grade, but when she entered 8th grade, she begged to return to public school. She was lonely and missed her elementary friends, many of whom attended Andrews, a brand new K-8 school that boasted of the latest in computer technology and large flat screen TVs in every class. We went on a tour prior to registration and were impressed by the highly polished marble floors, aesthetically pleasing architecture, and small classroom sizes. Mostly, we felt comforted by two things: each grade was securely locked down in their own pod for most of the day – and the school had metal detectors at its entrances. At least, we reasoned, she would be safe.

Then came her tales of bullying. Andrews, like most schools in America, has a “no bullying” policy. It’s clearly outlined in the school handbook and on the banners that hang in its halls. But failure to monitor bathrooms, combined with the crowded area in her 8th grade pod’s locker area where a front row of waiting students hid the pushing and shoving and harassment that went on behind them, provided a perfect opportunity to pick on fellow classmates. When I complained in several meetings and phone calls, I was told that if teachers don’t see it, there’s nothing they can do. “Say no to bullying,” it seems, is a feel-good mantra rarely enforced, as evident by the bullied shooters in many of the school massacres that have occurred since 1999’s Columbine High days.

We were frustrated, of course. But at least there were the metal detectors preventing guns, knives and homemade bombs from getting through the door.

Then came the phone call. Not in the late morning when the incident occurred, but at the end of the day – around 5 p.m. – hours after I had picked up my daughter. In a computerized robo call, parents were told that a student had brought a gun to school but had been apprehended and no one was hurt. The story made the local news –not when it actually occurred, however, because the school had not yet called it in, but in the evening after the fact. A boy in her pod had brought a gun to school and bragged about it to another student. Thankfully, that other student had done what has been re-enforced since Columbine: see something, say something; so he told a teacher. The school then went into lockdown, the 8th grader in question’s locker was searched, and the gun was found – thankfully unloaded. He was then expelled, sent to another school where, hopefully, he would be closely monitored.

When I called the principal the next morning, I was curious. How did the gun make it passed the metal detectors? Easily, I was told: on most days the metal detectors were turned off. “A police officer has to be on duty in order to stop the student who sets off the detectors,” she explained. “And we only have an officer on duty one day a week.”

Wait, what? Commonsense, at least to me, suggests that if the detector goes off, the kid gets tackled – by anyone in the near vicinity!

“No, we aren’t allowed to do that,” she said. “And also, many parents don’t want the metal detectors on. It gives the school a negative reputation.”

It took everything in me to remain composed. “Ever heard of Columbine High?” I wanted to scream into the phone. Instead, I said, “Well, then, look what happened.”

The mother who lost her daughter in Parkland is correct – why weren’t there metal detectors preventing the shooter from entering the school?

In fact, besides the obvious – that AR-15 and bumps and other guns capable of killing several people at once have no place outside of military operations during wars and conflicts – every school in America should have metal detectors at every entry point. And those metal detectors must be turned on during school hours and in the time afterwards when students stay after for school activities and sports.

Sure, it will cost millions – not an easy sell when our government slashes spending for education while it ups its military budget, leaving teachers to dig down deep in their own pockets for simple items like school supplies. But it’s an investment that must be made.

We live in different times. No longer are school fist fights the biggest threat to be feared, not when kids today have ever increasing access to guns and Internet sites that detail how to make homemade bombs, a cornucopia of information for those feeling isolated, bullied and maligned. Not when parents and children must pray each day that this is not the day or the school that gets caught in the crossfire of a disenchanted disturbed killer.

It’s no secret that I am a gun control advocate. I don’t think that any person needs to own more than one or two guns, and I am outraged that U.S. citizens are able to stockpile more weapons than simple personal protection calls for. I also don’t believe there’s any place in civilian life for guns that were created for wartime situations, such as AR-15s and bumps.

But at the very least, our schools should be safe havens where metal detectors check guns and bombs at the door. No student’s high school memories should include seeing friends and teachers slaughtered because we have failed to prevent weapons getting into schools in the first place.

Our children deserve the investment, no matter how much it costs. Otherwise, the price we may pay could be unfathomable loss.