A woman I went to college with works at a PR firm that promotes organic foods. She’s a successful cheerleader for the benefits of healthy eating and the importance of keeping chemicals out of our food source. 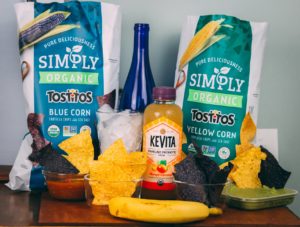 the tide of global warming. Today, organic foods and other green products can be found at all the major supermarkets and household stores, and whole industries have sprung up under the banner of greener living. Even at Wal-mart, one can find organic foods among the mainstream items, although the chain is not always consistent on what it sells. One week, one can find organic fruits and vegetables, cookies, sugar and more; the next week, an organic food choice might be missing. Wal-mart, after all, buys in bulk, so if there’s not a profit to be made there’s no point in selling it. Still, the food giant is probably keenly aware that going green is good for business these days, as consumers demand more environmentally-friendly choices.

Those choices go beyond food: we are encouraged to buy fluorescent bulbs that use less electricity by lasting longer, purchase slow-flow shower nozzles and toilets that use less water, invest in solar energy instead of electric or gas, buy cars that get better gas mileage or are electric, use cloth shopping bags instead of plastic or paper, and do whatever is possible to lessen our need and use of fossil fuels that are contribute to global warming.

I applaud these healthier choices — in fact, our family eats organic whenever possible, we recycle on a regular basis, turn off lights when leaving the room, pick up after our dog, and try to do what we can to lessen our carbon footprint. On the other hand, we depend on our computers for our livelihood, and each member of our family has one. We also drive a car that gets pretty good mileage but is dependent on gas to run.

The truth is, it can be damn expensive to go green — and that’s what my PR friend and environmental groups don’t get. If being environmentally friendly was more affordable and prices more competitive,  most people would be more receptive to living green.

Take organic farming, for instance. While over 14,000 farms are certified organic in the U.S. as of 2016, this only represents one percent of the farmland. This leaves a 99 percent  opportunity on our hands. Many non organic farmers state that if more consumers bought organic and green foods, then prices would come down. But you can’t tell people to eat organic if it’s out of their budget — particularly during this pandemic when food prices in general are on the rise. And you can’t wait until there’s more acreage and then say the price will come down: it has to happen the other way around.

You also can’t force large farm conglomerates to farm organically when it costs more and is therefore less profitable. And you can’t tell small organic farmers to charge less for their organic crops when they have to compete with the big guys just to stay alive.

Some organic food advocates point out that Americans spend a smaller percentage of their income on food than most countries, thereby justifying the price of organic and locally grown foods. They state that a value shift is needed on the part of the consumer to make buying fresher, more nutritious and organic foods a priority over the purchase of available cheaper foods.

It’s a viable concept, but that’s not the real world most people live in. It also puts the blame on the consumer. True, the costs of conventional foods are externalized; that is, we pay more for them in the long run due to the wastes associated with mainstream farming which many consumers aren’t aware of when they buy cheaper, non organic products. But most Americans aren’t considering the long term effects of their buying actions — especially not during the coronavirus when many are out of work or are barely hanging on to their jobs. When the choice is between an organic food that costs twice as much as non organic, guess which gets bought? Sometimes, for many, it comes down to getting more food for their bucks at a time when many folks are struggling just to put food on the table.

In addition, if green products, such as green lawn mowers and electric or hybrid cars, were cheaper, more people would buy these products. If going solar was more affordable, then perhaps more people would transform their homes. And if “green” light bulbs gave the same lighting as incandescent ones, and were cheaper, perhaps more consumers would find them more appealing. Sure, energy efficient lighting lasts longer over the long run, that doesn’t convince a frugal consumer to lay down more cash in the here and now.

It’s nice in theory to talk about how much better it is to buy healthier foods and goods, but talk is cheap and green products are not. If those advocating green living want to get everyone on board, they need to make it financially worthwhile for all concerned. Tax breaks and low interest loans for organic farmers and green companies are one way. Lower prices to spur consumption is another.

Otherwise, green living will remain out of reach for many. That’s the reality over the ideal.