I didn’t know Ted Kennedy, not personally anyway. But I felt like I did. He was the voice for millions like me — middle class, blue collar background, sometimes uninsured. 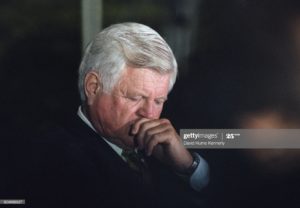 Much has been written about Ted Kennedy as the symbol of liberalism. He certainly stood for those who have no one to speak for them, and he always went to bat for the underdog.

When the GOP made the word “liberal” something dirty and shameful, and when many Democrats did everything they could to prove that they weren’t liberal in the least, Teddy stood proud for all that liberal really means: fairness, open-mindedness and accepting. He said, “If by a liberal, they mean someone who looks ahead and not behind … someone who cares about the welfare of the people — their health, their housing, their schools, their jobs, their civil rights … then I am proud to say I am a liberal.”

When life threw him curve balls and unfathomable grief, he met his feelings straight on but then moved on. He knew that many people deal with similar challenges on a daily basis, without the financial cushion and supportive connections he was blessed with.  He once said he had to live his life anyway, so he might as well live it doing something worthwhile and meaningful.

In the early days of his political career, he was in the shadows of his charismatic brothers, John and Bobby. He was considered a lightweight, not to be taken seriously, but as time has proven, he was underestimated. After both brothers were murdered, he became the one person his family could lean on and count on always. In the political arena, he was the Senator who actually listened to the people.

In the end, perhaps Ted more than any other Kennedy is the one who made the most difference.