The first time I stood before a canvas after years of not painting, I panicked. Where do I start? How do I do it? What if I’ve lost my artistic abilities? What if I’ve forgotten how to paint? 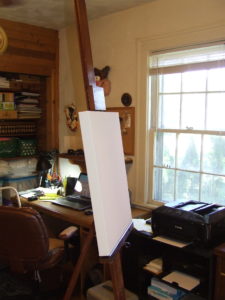 Riding a bike, I told myself. You never forget, but it might feel wobbly at first until you’ve gone a few rounds around the block. Wobbly but not forgotten. And so what if it doesn’t turn out.

When I was a child, my artistic father would say he was rusty whenever I’d ask him to show me how to draw something, like a horse – and then he’d whip out an amazing creature pounding the ground with perfect hoofs, perfect muscular legs, and a perfect head.

I never did master drawing a horse. I also never understood what he meant.

Back in those days my mother could barely keep my brother and me in enough drawing paper, and when we’d run out we’d sketch on anything we could find – the white cardboard stuffed inside stocking packages, brown paper bags, notepaper, the inside of cereal boxes we had cut open and laid flat. It didn’t matter; we just needed to draw. And if it didn’t turn out, we didn’t care. The artistic child doesn’t get hung up on perfection or technique; he or she simply starts over again.

My brother and I also competed for artistic dominance. In a family of six kids, we were the most obsessed with drawing. It was how we got attention and stood out from the crowd. Or maybe we were just the only ones out of all the siblings who were truly interested in creating art.

Our tools at that time were drawing pencils, colored pencils and Rapidograph pens. Our favorite pastime was going to the nearby art store, where we’d spend our allowances on supplies. We couldn’t understand how our father let his artistic side slide, and we vowed that would never be us.

After high school graduation, I got a small art scholarship at Columbia College in Missouri. There, I was an English major with the goal of being a writer, but since there were no required basic ed classes at the college, I had room in my schedule to minor in art. My art teachers were renowned in their own right: Sidney Larson, William J. Williams, Tom Watson, John Lynch and Ben Cameron. I wasn’t considered a shining star among the art students, but I was happy to sit at the elbow of those who were and soak in their styles, techniques and skills. CC was a small college then with less than 1,000 in attendance, making the interaction among professors and students, and students with each other, personal, encouraging and competitive. The lessons learned from them have been lifelong.

After college, I moved to Chicago, where I worked first as a copywriter in advertising and then as a writer and editor in publishing. I had a boyfriend who told me I was only a pretend artist and that 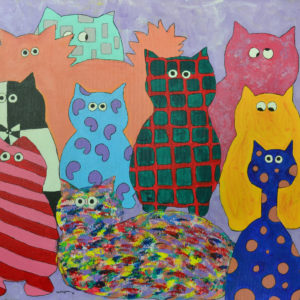 I needed to stick to writing. Five years later, I moved back to Florida and reunited with my high school sweetheart (now my husband). He believed in my artistic abilities and I spent a few years whipping out paintings.

And then life got more crowded. I was laid off my job, but a freelance writing opportunity evolved into a way to make a living. I got married, had a child, enjoyed a steady stream of writing gigs, and my art fell by the wayside. My daughter wound up being artistic – in fact she’s much more talented than me – and I spent most of my time working as a writer, being a wife and mother, and homeschooling her. Before I knew it, twenty years went by.

I’d tell my daughter I once did a lot of art, but with no recent work to show, she doubted my story. I would buy art supplies I’d never use, and I finally understood what my father meant when he said he didn’t have time for art. Then I witnessed my brother, who had also neglected his artistic side, sign up for painting classes and produce one painting after another. This led me to lie in bed at night and wonder what happened to that girl who had to paint, had to draw, had to create?

There were times over the years when my daughter and I would sit together and draw, but it felt awkward and stiff in the process. This is what my father meant when he said he was rusty. It was as if I had lost my abilities, like a muscle that hasn’t been worked out in years and eventually wastes away. I was an empty artistic vessel, a shadow of my former artistic self.

Getting older can be a great motivator. When you’re on the downside of the curve, you have nothing to lose. I knew I needed to create art and I needed a plan, one that removed the guilt of viewing time spent on artistic projects as a luxury I couldn’t afford.

I needed to get back on the bike.

So I typed up a schedule and pinned it to my bulletin board: Tuesdays, Fridays and Sundays would be my art days, with the remaining days of the week assigned to writing and freelance jobs, housework, yard work and other tasks. As corny as it sounds, having these designated art days removed my intrusive thoughts that I should be doing something else. This is my time for art, carved out neat and tidy, and that little trick gives me permission to create.

It wasn’t easy in the beginning. I felt paralyzed about where to begin. How do I mix paint? What if I just can’t do it? What if I can’t remember the process? Watching YouTube videos helped immensely. They awakened lessons I had locked away in my mind. And looking at other people’s paintings on Pinterest.com and other sites was inspiring and thought provoking. Before I knew it, I had done my first painting, and then another and another after that.

I have also discovered several different art sites, like fineartamerica.com, where I can showcase my paintings and sell them as prints, t-shirts, mugs, canvas prints, or the original paintings. Nothing is more motivating than having someone like something you did enough to buy it.

Now when people ask me what I do, I say I’m a writer and an artist. I no longer feel that I’m a pretender or grieve for that lost part of myself – and one day, my daughter actually included me in a conversation about what it means to be an artist. Do I regret the years of not doing art? Yes, but I’m back on the bike. 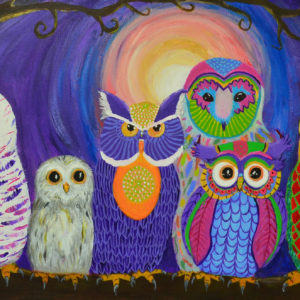 I remember how my Air Force father would wistfully wonder how artists in the military got their jobs while he was stuck in the Motor Pool. After he retired, he went to work for Pratt & Whitney as a commercial artist, but he often said he hoped to one day do paintings of historical figures. When he got cancer, he told me, “Maybe I’ll do a painting if I can get better.” That day never came. Even so, I let years pass after his death before picking up the brush again.

Thankfully, I did pick it up and have learned that you really can reclaim your art. It begins with making a commitment – like a schedule — and giving yourself permission to set aside the time. An artist who doesn’t create will never truly be happy because talent wasted is a life not fully lived.